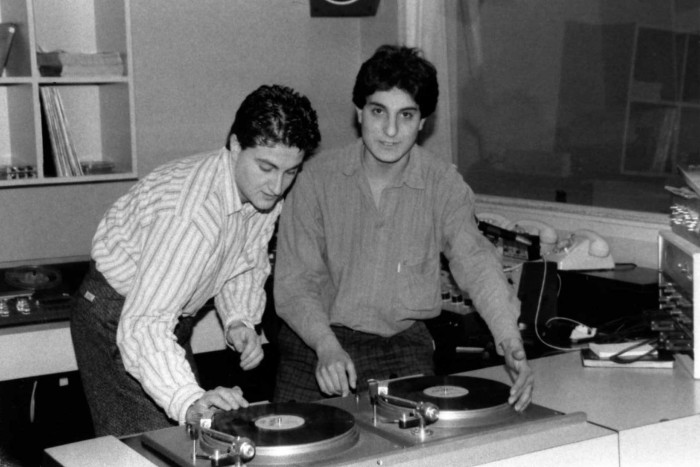 This is a brief bio of Jordi casas as radio host. Beside the radio stations listed here he also used to work at 101.1 Ràdio and Radio Nova.

Jordi Casas began at the tender age of 17 radio presenter at Radio Bruc, El Bruc, a beautiful village near Montserrat mountains, playing all the brand new hits of the ’80s and presenting funky music like: Earth, Wind & Fire, Whispers, Kool and The Gang etc..

The first song he presented was certainly something really odd: “Tauchen-Prokopetz – Codo”

During the 80s he was hired by a major broadcasting network, called “Cadena 13” (Network 13), where he worked together with radio stars such as Albert Malla (now partner at Gum Fm) from the famous Spanish program “Los Mallamusicales”. Since the mid-’80s until 1990 Jordi casas led a Italo Dance program named “Spaghetti Tiramillas” and he had the pleasure to interview Spaghetti dance idols like David Lyme and even Lorenzo Santamaria and Sau.

After presenting all the songs of Jerry Lee Lewis and the Great Ball of Fire, won the local edition (Manresa) of the famous contest “Concurso Los 40 Principales” and went on to fatten the team of the Top 40 every morning and presenting several of the Top 40 parties with the presence of artists such as Crystal Waters, Technotronic, Los Toreros Muertos, or Inhumanos Sergio Dalma etc. It happened in 1990.

From 1993 to 1999, Jordi Casas was one of the famous DJ’s at Flash FM. He presented radio formula and also shows as Mas i Mas Flash, playing R & B, Rap and Acid Jazz, and Swing Flash where besides of Hip Hop he discovered that there was a musical style called “House” and lately: the “Jordi Casas House”, a program that was made curiously at lunchtime (from 1:00 PM to 3:00 PM) and had thousands of followers.

As a DJ played the first Megaplec Dance at The Palau Sant Jordi, and was present at many local festivals in Atlantida Sitges, Backfire, Matinée, Amnesia and Space in Ibiza, and even was speaker at the DJ Awards – Pacha Ibiza where under the watchful eye of his fellows and public took the Spanish singer Massiel to sing on stage.

Since the first day, Jordi Casas was part of Ràdio Flaixbac. In other words, he was the founder. It happened in 1994.

At Radio Flaixbac he combined radio formula along with specialized programs like “Get Back” playing 70s and 80s hits.

In 2000 Jordi Casas was in a short but intense working relationship with Cadena 100, presenting a house and dance radio show called “SweetBox”.

By continuing to use the site, you agree to the use of cookies. more information